during the war, Britain and USA were allies of the Soviet Union againt Germany. after the war they became enemies.

after Hiroshima and particularily 1949 when Russia developed the atomic bomb, politicians realised that another hot war would kill all humankind it would be MAD (Mutually Assured Destruction).

so they did everything short of war (cold war).

Causes of the Cold War

Who Caused the Cold War?

the only thing that united them was their hatred for Germany.

America had a new president - Truman, who was determined to get tough with the Russians.
he had just learnt that America had just tested the first atomic bomb, giving them a huge advantage over everyone else.
in March 1945, Stalin had arrested the non-Communist Polish leaders, meaning that at Potsdam the arguments came out in the open:

during 1946-47, Stalin made sure that communist governments came to power in all countries of Eastern Europe (countries Soviet Union had conquered in 1945). getting rid of opposition bit by bit.

5th March 1946- Winston Churchill gave a speech at Fulton in America. saying how a shadow had cut off eastern Europe by an 'iron curtain'

he said the people of eastern Europe were subject to Soviet influence, totalitarian control and police governments 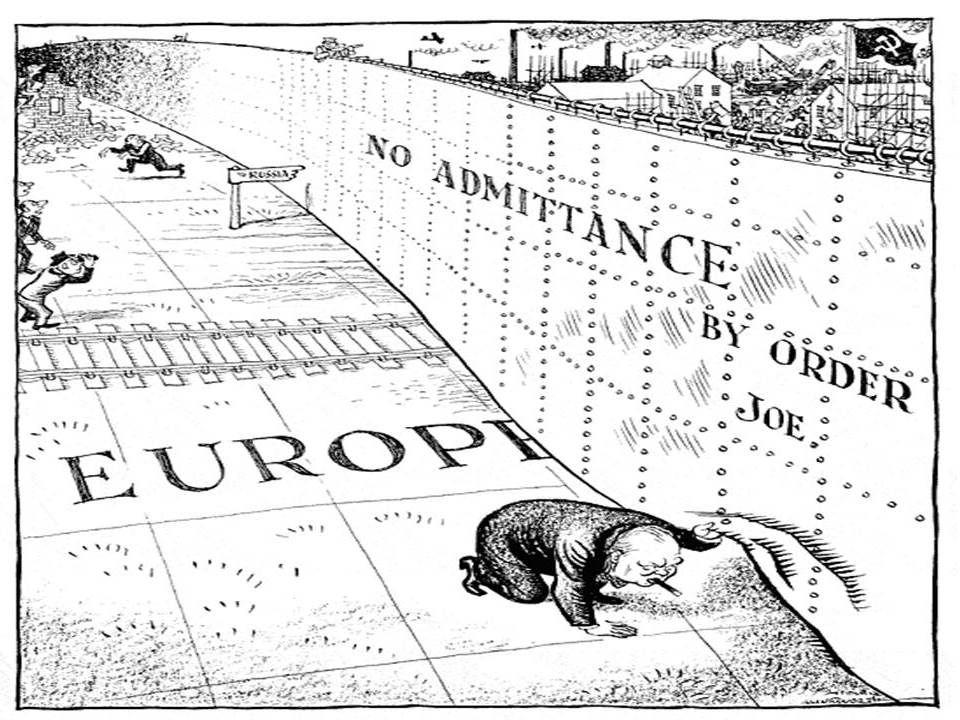 by 1946, Greece and Czechoslovakia were the only countries in eastern Europe that weren't communist.

although the government was being supported by the British soldiers, they were still having to fight a civil war against the communists.

Feb 1947- the British told Truman they could no longer afford to keep their soldiers in Greece and so he stepped in and paid for the British troops to stay there.

in the 1930's, America kept out of Europe's business

in March 1947 Truman told the American people that it was their duty to intefere with Europe's issues.

he didn't try to destroy the USSR but wanted to stop it from growing any more than it already had done.

in June 1947, the American general George Marshall went to Europe. he said that every country in Europe was so poor that it was in danger of turning communist

he said that America should give $17billion of aid to get Europe's economy going again and stopping them from becoming communists. the Soviet Union hated Marshall aid and therefore forbade the communist countries to ask for money.

in October 1947, he set up cominform. Every communist party in Europe joined, it allowed Stalin to control all the communist countries in Europe. 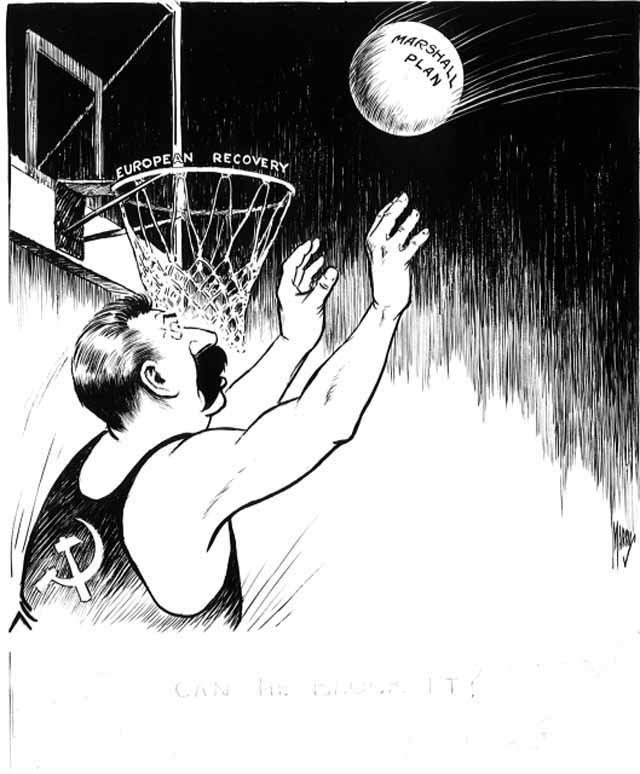 at first, the American Congress did not want to give the money for Marshall Aid

in February 1948, the communists took over in Czechoslovakia .

Congress was scared and therefore voted for Marshall aid on 31st March 1948. The Start of the Berlin Blockade

Bizonia- Russians taking German machinery back to the USSR. in January 1948, Britain and the USA joined their zones together to try and get the industry going, they called it 'Bi-zonia"

New Currency- 1st June, America and France anounced they wanted to create the new country of West Germany, on the 23rd June, they introduced a new currency into 'Bizonia' and west Berlin. but Stalin was trying to force the USA out of Berlin.

the American army wanted to fight it's way into Berlin but that would have caused a war, so instead, Truman decided to supply Berlin by air. the situation was bad at worse, as the blockade went on, things got better. on 12th May 1949, Stalin gave up and opened the borders.

Cold War got worse-
almost started an all-out war
East and West Germany-
Germany split up. May 1949, America, Britain and France united their zones into the Federal Republic of Germany (West Germany)
October 1949, Stalin set up the Democracic Republic (East Germany)
NATO and the Warsaw Pact-
1949, the western allies set up NATO (North Atlantic Treaty Organisation) as a defensive alliance against Russia, the NATO countries surrounded Russia.1955- the Soviet Union set up the Warsaw Pact (alliance of communist states)
Arms Race-
After Berlin, the USA and the USSR realised they were in competition for world domination, they began to build up their arms.

de-stalinisation didn't mean a change back to capitalism or freedom from Russia. when communist countries went too far in their reforms, Krushchev sent the Red Army to stop them

his peaceful co-existence was more like peaceful competition, he started to build up Russian Power:

America then became just as aggresive:

After 1957, tension grew between Russia and America

in May 1960, 9 days before the summit, Russia shot down an American U2 spy plane. at first the Americans tried to say it was a weather-plane off-course. when the pilot was put on trial, they admitted it was a spy plane.

Krushchev refused to take part in the summit meeting unless they apologise. President Eisenhower siad he'd call off spy planes but wouldn't apologise.

at the Vienna summit of June 1961, Krushchev again demanded that Americans leave West Berlin. but Kennedy refused and increased spending on weapons in July.

on the 13th August 1961, Krushchev built a wall between East and West Berlin.

Causes of the Cuban Missiles Crisis

on the 14th Oct, U2 spy planes took pictures of a nuclear missile base in Cuba. Kennedy had 10 days until Cuba could fire missiles at America.