Raising the hue and cry - basically, calling on fellow villagers to chase the criminal. If villagers failed to join then the village could be fined.

Tithings - adult men were put into groups of ten. If one member of the ten broke the law, it was the responsibility of the others to catch the culprit and take him to court.

County Sheriffs were appointed to oversee law and order in a county. They were appointed by the King and were the chief legal officer in the Middle Ages. If villagers failed to catch a criminal, the Sheriff would form a posse comitatus to continue to chase the criminal. All men over 15 could be forced to join a posse by the Sheriff.

A posse would also deal with any local rioting. A Sheriff also investigated major crimes, again with the help of a jury of local people who would swear an oath to say who they believed had committed the crime. The Sheriff would also hold a criminal after capture in the local gaol.

County Coroners were appointed after 1190. They enquired into violent or suspicious deaths, with the support of a jury of local people.

After 1250, villages started to appoint constables in each village to monitor law and order. These would be leading villagers who would take the role for one year. The role was unpaid and the Constable would lead the hue and cry as well as have other responsibilities.

Royal judges travelled around the country dealing with serious cases. County courts were set up with Justices of the Peace (JPs), also known as Magistrates, hearing cases. JPs were usually the main local landowners. The role was unpaid. Each village or manor still had a manor court, held by the local lord or landowner for minor cases.

Watchmen, or Bellmen, had existed since the reign of Edward I. They were not paid, and all men in a town were expected to volunteer for this duty. They patrolled the streets of the largest towns on a nightly basis. Wealthier town dwellers would pay others to do their duty.

They became known as Charlies, or Charleys, after 1663 when Charles II set up a force of paid Watchmen to patrol the streets. They did not have a uniform but were identifiable by their heavy coat, lantern and bell.

Although the Charlies were low paid, and became a source of ridicule, the intervention of the monarch in policing and the payment of the Watchman marked a significant change away from communities policing themselves.

People commit crime for many reasons, including:

Vagrancy came to be seen as a serious crime in Tudor times. At the time, many people believed vagrancy was caused by idleness. People saw the vagrants, or 'vagabonds', as weak, lazy people.

Some people blamed the vagrants themselves for encouraging drunkenness. Others believed vagrants had been born with a flaw that led them into idleness and crime.

Many people felt threatened by their presence, believing they were spreading the plague or likely to rise up in rebellion, as some were ex-soldiers. In response the Elizabethan Poor Laws of 1598 and 1601 made each parish responsible for looking after its poor, and punished vagabonds.

the laws of henry viii

The Laws of Henry VIIIOutcomes Act of Supremacy 1534 This law made Henry VIII head of the Church in England and Wales. Those who refused to accept Henry's authority over the Church were punished. Sir Thomas More was executed as he refused to swear the Oath of Supremacy. Act of Succession 1534 The children of Henry’s new wife, Anne Boleyn, were given precedence in the succession over his daughter Mary. A Treason Act in the same year made opposing this law or the Act of Supremacy a crime punishable by death. Dissolution of the monasteries 1536-40 The monasteries were closed across the country. Act of Six Articles Reaffirmed the Catholic faith. Protestants who denied the Catholic faith could be burned at the stake.

After Henry VIII’s death in 1547 his young son, Edward VI made the church Protestant.

Catholic Bishops who refused to follow Edward’s changes were imprisoned for heresy. But there were only two executions for heresy in this reign. 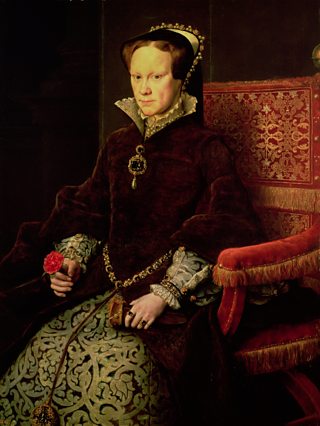 The Catholic Mary Tudor came to the throne in 1553 after a brief attempt by the Protestants to have Lady Jane Grey crowned Queen. She quickly reversed all of Edward’s religious changes. Mary restored the rule of the Pope and brought Catholic practices back to the Church.

People who refused to accept Mary’s changes were guilty of heresy. Leading Protestant bishops were tried for heresy by Mary.

Elizabeth I came to the throne in 1558. Her religious 'settlement' was a return to moderate Protestantism.

Many Catholics were deeply unhappy about Elizabeth’s religious settlement. Cardinal William Allen refused to take the Oath of Supremacy and fled to Rome. Throughout Elizabeth’s reign, Catholic priests were trained abroad and returned to England to try to convert people.

Some Catholics engaged in plots against Elizabeth with the aim of replacing her with her Catholic cousin, Mary Queen of Scots. Many Catholics continued to practice in the Catholic way. Catholic preachers who continued to preach were committing a crime and were punished if caught.

Elizabeth claimed that she did not persecute people for heresy, and only four Catholics were put to death as heretics. However, it is estimated that 250 Catholics were executed for the crime of treason during Elizabeth’s reign. Richard Gwyn was put to death in Wrexham in 1584 and William Davies, a Catholic priest, was executed in Beaumaris in 1593.

James I ordered that Catholics who did not attend Church of England (Protestant) services should be fined, and was reported to detest the Catholic religion. This led to greater opposition to him from Catholics, including the Gunpowder Plot of 1605, which attempted to kill the King and blow up Parliament. The plotters were caught and were executed for high treason. 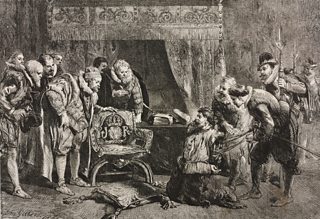 The gunpowder plot, Guy Fawkes being interrogated by James I and his council

In the Stuart period, Puritanism increased in popularity. After the execution of Charles I in 1649, the Puritan Oliver Cromwell became Lord Protector, and Parliament was dominated by Puritans.

This led to a series of laws which tried to enforce Puritan ideas and it became heresy not to follow laws such as these:

After the restoration of the monarchy with Charles II in May 1660, the strict Puritan laws were scrapped.

Witchcraft was a criminal offence until 1735, and was punishable by death during the Tudor and Stuart periods. Witches were seen as the devil’s helpers on earth. Often, people's lack of understanding led them to believe that bad things were the work of the devil or witches. King James I wrote a book on witchcraft which suggested ways of identifying and catching them.

Each monarch was trying to ensure everyone followed their religious laws. Witchcraft was therefore a concern to both Catholics and Protestants. It is estimated that in 200 years, up to 1,000 people, mostly women, were executed for witchcraft. In particular, the 1640s saw a significant witchhunt in Essex led by the witchfinder, Matthew Hopkins.

YearPunishment 1495 Vagrants were put into the stocks for three days. After that they were sent back to the parish of their birth. 1531 Vagrants were whipped and sent back to the parish of their birth. Repeat offenders were punished more harshly. 1547 Vagrants caught begging were branded with a V on their forehead and enslaved for two years. Repeat offenders would be executed. This law was repealed after three years. 1601 The Elizabethan Poor Law - local taxes were put in place to provide money to support the poor in the area and to provide work for them. However, those who refused work were whipped and sent to a house of correction. Beggars were whipped until their back bled, and were then sent back to their place of birth.

Serious crimes were punished with capital punishment throughout the 16th, 17th, 18th and 19th centuries.

Capital punishment was carried out in public until 1868. After 1868 it was still used, but was done away from public view.

The most common method of execution was by hanging. Almost all towns and cities had a place of execution, with a scaffold. In London, Tyburn, near where Marble Arch stands today, was where most criminals were hanged. Prisoners were often dragged there from Newgate prison to the spot. In 1537, Henry VIII used Tyburn to execute the ringleaders of the Pilgrimage of Grace. Also during Henry VIII's reign, Bishop Rowland Lee was tasked with bringing law and order to Wales and had over 5,000 publicly hanged. 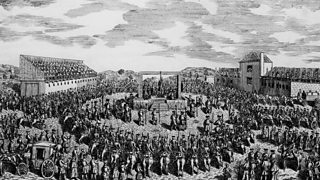 Execution of the Earl of Ferrers at Tyburn, Paddington, London, 1760

Criminals were usually taken to the gallows on the back of a cart. On the way, people could throw things at the criminal and often shouted or jeered. A vicar would often encourage the condemned criminal to apologise for his or her crimes. The criminal would then be hanged and would die from strangulation. Often the criminal’s relatives would pull on his/her feet to speed up the death.

Other methods of execution included burning at the stake, which was the punishment for heresy. Offenders would be tied to a stake and a fire would be set around them. Often gunpowder would be put between the condemned person’s legs to speed up the death.

Catherine Murphy, a counterfeiter, was the last woman in England to be officially burned at the stake on 18 March 1789. She was actually strangled first as the act of burning to death was now distasteful. The punishment of burning at the stake, which at the time applied to women and not to men, was abolished a year later.

The method of execution for the crime of treason was beheading or hanging drawing and quartering. Royalty were beheaded, usually with an axe. Mary Queen of Scots was executed in this way in 1587.

Commoners found guilty of treason were hanged but cut down whilst still alive. They would then have their entrails (intestines) pulled out. They would then be beheaded and their body would be chopped into four parts (hence the term 'quartered'). The traitor’s lands and money would be confiscated by the monarch. Guy Fawkes was sentenced to be executed in this way, but avoided it by breaking his neck after throwing himself from the platform in January 1606.