Distribution and types of cold environments

- Found at high altitudes and latitudes

In extremely cold and arid areas eg. Antartica, mass can also be losr by sublimation ie. the process where a solid changes directly into a gas.

Glaciers gain mass in the accumulation zone, the upper part of the glacier where input exeeds output.

Mass is lost in the lower ablation zone where output exeeds inputs.

At the transition point between the ablation and accumulation zones, the two zones equal each other. This is know as the equilibrium line. It aprox. coincides with the postion of the snowline. This can be mapped to track how the glacier changes.

Accumulation > ablation = Mass balance is positive (the snout will advance)

Ablation > accumulation = Mass balance is negative (the snout will retreat)

In continental zones the ice will flow outwards and downward and towards the valley floor in the form of snow.

Evaporation will also occour here from the snow/ice to the valley floor.

In the marine zones flow willbe more towards the edges where the ice shelves will form, these will then break off and fall into the sea

This ice will melt into water, which iwll then evaporate and will then fall as snow and start the cylce again.

Cold from above due to location, but warmed from below.

2) Regelation (pressure by melting) - When ice presses against a small obstacle, but rather than deforming the ice melts and re-freezes on the lee side where pressure is lower.

3) Basal slip - slippage over a layer of water at bedrocks

When does it occour?

Slow creep due to slippage within and between ice crystals

Can occur in both polar and temerate glaciers

Bedrock deformation + Extra into on movement

Movement thruogh deformation of sediment or weak rock beneath the glacier

Type of movement is related to temperature of the ice:

- Basal sliding is most efficient if water is present for lubrication

- Bedrock deforamtion is more effective beneath temperate glaciers, as the underlying material would be saturated with water (reducing strength)

- Therefore the colder climates limit the amount of water which leads to movement in these environments mainly being mainly internal deformation.

When the melt water from a glacier freezes to the base rock and lumps of cracked and broken rock from the back wall.

Happen when the rocks which have frozen to the base of the ice and back of the glacier, scrape along the rock at the base -- Causing striations*

When melt water or rain gets into the cracks in the back wall of bedrock and freezes as temperatures drop at night, expanding and causing the crack to get larger, and eventually break away.

- Basal melting, and aids in the base plucking process

- Occours as overlaying material is moved

- The water is under hydrostatic pressure therefroe erodes rock

- hollow created in the hillside above a glacial valley

- Enlarged through plucking and abrasionas the ice rotates under gravity

- a narrow ridge between two corries (like a knife edge)

- as two corries become increasingly enlarged, the ridge between them gets narrower

- a pre-glacial river valleyis widened, through erosion, by an advancing glacier

- Tributary glaciers with small amounts of ice could not erdoe all the way through to the valley floor (or as deeply as the main glacier), so are left higher up

Ice hits a steep resistant outcrop of rock first, protecting the lee side of th obtsacle from erosion as the galcier has lost speed and power.

Asymetrical bare rock outcrop with a gently sloping stoss side where the glacier would have scraped up causing abrasion to happen. On the lee side it is sharp and jagged, because as the glacier passes over, it plucks at the rock.

Grooves on exposed rock caused by abrasion from rocks embedded in the base of the glacier as it passes over bare rock.

- the largest are heavier so are dropped off higher upstream

Till fabric for boulder clay (Mirco)

- analysis of the stones may show orientaion parallel to ice advance, and rock type can be helpful to determine from where the glacier came

- large boulders of rock which are dropped by the glacier, prime examples of glacial entrainment.

- as the ice retreats the rivers deposit their loads beneath the glacier.

Material derived from freeze-thaw weathering of valley sides, and is carried at the side of the glacier

Material dragged beneath the glacier

These form behind and parellel to the terminal moraine, marking stages of retreat. 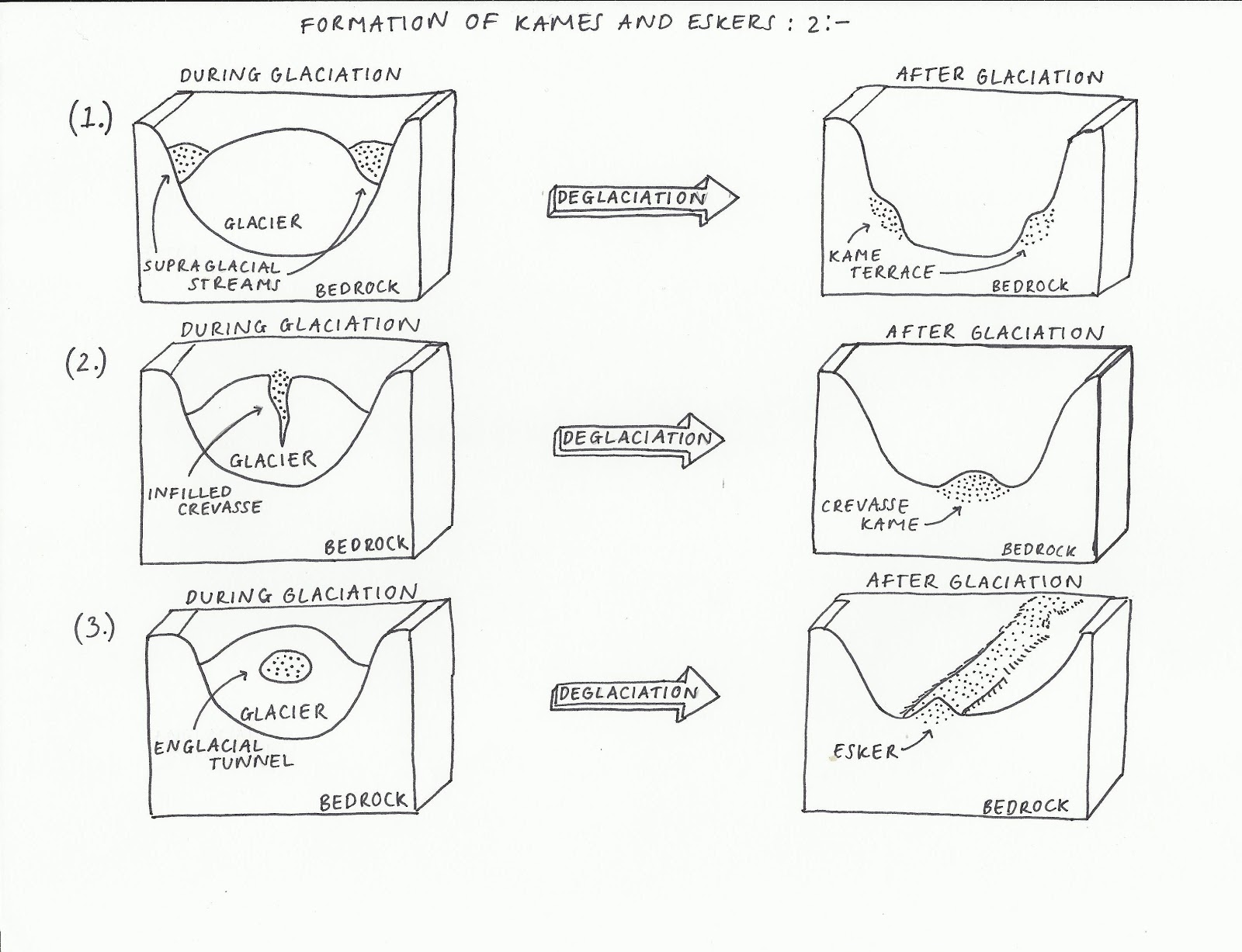 - designated the continet of peace and science in 1959 (Antartica treaty)

- researching life on the edge, exploring how ecosystems cope with intensly harsh conditons

- Understand how the ice is melting at its impact

Developing nations have few transport links up into the high mountains, thereofre there is limmited access to supplies and employment is also restrictive.

Countries such as Nepal, Bolivia and Ethiopia the highlands are mainly inhabited by idigenous communities whose way of live is dependant on subsistance farming.

In Bolivia 70% of the population live sin the Andes growing crops such as potatos, quiona and beans to feed themselves. They also rear lamas and alpacas for clothing and meat. However these people only earn 30% of the countries GDP per capita. Almost all those living under the poverty line in Bolivia are indigenous Indians living in the mountains.

In these developing regions technological leap-frogging with internet access and mobile phones has created oppotunites Cottage industry like weaving and knitting cooperatives.

It has also meant that there can be a much wider market and targetting of ecotourism in the area.

In Alpine regions in developed countries, the agriculture in upland glaciated regions is primarily pastoral because of the high precipitaion, jagged steep landscape and shallow soils, make cultivation exeedingly difficult.

In the Summer animals are grazed at high altitudes in the meadows, as the snow melts and provides high quality grass.

At the same time the grass in the valley can be made into hay for winter feeding.

During the snowy witers animals are brought to the vlley and housed near farms houses and are fed on hay or grazed on lower pasturs.

Hillside afarming is a struggle,especially in those areas where farm prices are exeedingly high and there are few government support sydetems (EU rural payments).

Thus many regions and uplands are being used increasingly for siviculture (forestry).

In the UK this is carried out both by the Forestry Commision and private investors, with the main type of tree being non-native, fast growing conifers, such as Sitka spruce grown for softwood timber, wood pulp and even paper.

These conifers tolerate harsh climates and acidic soils taht would not be sutiable for other land uses.

(However this creates monoculture etc etc..)

Glacial erosion plays are large role in the removing of lose overlying soil and vegetation to expose economically vaulabe rocks.

In many active or relict area there are mine and quarries of mineral deposits and ores. Rocks such as slates and metamorphic rocks also form much of the glaciated moutains.

HEP is a major use of water sources derived from glaciers.

Both Norway and New Zealand  derive over 90% of their electricity from this source. HEP can be provided by natural ribbon lakes or dams and resoviors in a glaciated valley. Switzerland has over 500 HEP stations producing 70% of its overall electricity.

HEP is a renewable resource, but there are issues with the reliablity of the water supplies and environmental concerns over damming of rivers.

In developing countries liek Nepal or Bolivia micro-hyrods can revolutionise the quality of life for many villages.

Tourism has develop and grown massively over the past two or three decades, which has brought massive economic benefit to moutainous regions, with people attracted to the spectacular scenery of the past and present glaciated landscapes.

A large rang of outdoor activities are avaliable in Alpine landscapes;

- Glaciers are also valuable as a source of water for irrigation as they produce most water in the late spring and summer. The USA Arapaho glacier currently produces about 260million galloons of drinking water per year for the city of Boulder, Colorado. As well as irrigating huge areas of crops.

- Loose snow acts like dry sand; a small amount of snow slips out of place and starts to move downhill

- Slab avalanches occour when a layer of snow breaks away from a weaker underlying layer. A run of higher temperatures followed by refrezing creates ice crusts, which provide instability. Slabs can bring down 100 times the initial volume of snow and cause huge damage.

- The towns of Yungay and Ranrahirea

- Destroyed by an ice and rock avalanche caused by an earthquake

- It travelled 16km down the valley as a muddy flood killing over 18,000 people

In 2015 the Neplaese earthquake set off many ice and rock avalanches that killed some mebers of expeditions at Everest base camp.

A powerful flood caused by the sudden discharge of a subglacial or ice moraine dammed lake. These types of floods can take place wherever melt water collects behind an ice or moraine obstruction.

Ways they can be triggered:

- Breakdown of an ice dam because of tectonic activity

This type of flooding can also affect periglacial landscapes during melt season.

These are particularly frequent in Iceland due to the fact that the volcanic activity generates  meltwater beneath the glacier, while acting as a trigger for ice instability, which can lead to a sudden release of melt water.

Heat from Grimsvotn volcano beneath an ice cap melts the ice and creates a subglacial lake in its cauldron. When the lake reaches a critical size it forces its way through subglacial tunnels and the lake drains catasrophically in hours.

In 1996 the eruption of the volcano broke through the ice and sent up a huge collumn of ash into the sky, melting a large amount of the ice. Then on 5th November the melt water burst through the glacier causing USD$15 million in damage to infrastructure.

The council has developed a policy of ‘integrated tourism’, which educates and involves visitors and local people in the protection of the Alpine environment.

• Pollution from public transport reduced as buses are low emission.

• Some hotels fitted with solar panels to heat water and systems to automatically turn lights off. CO2 emissions reduced.

• Education about the Mer de Glace

Temperatures have risen by 1⁰C over the last century and has risen by 3⁰C over 1,800 metres in the last 40 years and the Mer de Glace is 500 metres shorter than it was in 1994. Furthermore Winter snowfall is unreliable and the lower Alps is receiving less total snowfall overall.

• Some resorts will no longer be viable as Winter resorts- this is a real problem in the southern Alps.

• Fewer sightseers and ice climbers will be a problem in all resorts.

• Less tourism will result in less income for the area .

• However, the big, high-altitude resorts, should prosper as people are forced to go to them. They have the facilities and amenities already and the ability to make artificial snow.

• Agriculture could benefit from a higher snowline and warmer summers – a longer growing season.

• Jobs could be lost if tourist numbers fall – higher unemployment.

• With no jobs, young people will leave to find work – change in the population structure .

• Services could decline, but the elderly that remain will demand more.

• The Alps is a ‘fragile environment’, which means it is easily damaged.

• A delicate balance exists, so the increase in temperatures/ loss of snow could mean that it is uninhabitable for some species.

• Less water, so river levels will drop that have their source in the Alps. More avalanches .

• Rock falls as the ground thaws.

- Avalanches caused by skiiers and pollution

- Biodiversity being destroyed by the presence of humans, the building of structures/settlements and the planting of monoculture (Lake district)