Waves are the result of the wind blowing over the sea. As they approach land they break.

Why are Waves Generally Larger in South West?

Backwash is always at RIGHT ANGLES to the beach. Due to gravity.

Swash : The forward movement of a wave up a beach

Backwash : The backward movemnt of water down a beach when a wave has broken.

The Foreland (Dorset Coastline) is a great example of a headland which shows these features - there is a distinctive stack called Old Harry and a stump known as Old Harry's Wife.

A good example of a distinctive arch, also found on the Dorset Coast is Durdle Door

Hydraulic Action : This involes the sheer power of the waves as they smash onto the cliff. Trapped air is blasted into holes and cracks in the rock, evenutaully causing the rock to break apart. The explosive force of trapped air operating in a crack is callled cavitation.

Corrasion: This involves fragments of rock being picked up and hurled by the sea at a cliff. The rocks act like a arosive tool by scraping away the rock.

Abrasion: This is 'sandpaper' effect of pebbles grinding voer a rock platform, often causing it to become smooth.

Attrition: This is where rock fragments carred by the sea knock against one another, causing them to become smaller and rounder.

Solution: Some rocks are vulnerable to being dissolved by sea water. This is particuarlly true of limestone and chalk, which form cliffs in many parts of the U.K.

Longshore Drift is a way of transporting pebbles and shingle across the beach. This is where the load gets taken by the swash at an angle then move back towards the sea with backwash. This is then repeated and then over a long time the pebble will have travelled across the beach.

The same as in Rivers

Traction: Rolling of large pebbles along the seabed

Saltation: a 'bouncing' motion of particles and pebbles which are too heavy to be suspended in the sea.

Suspenstion: Particles carried within the water as are too light to travel along seabed.

Solution: dissolved chemicles which are transported in the sea such as limestone and chalk. 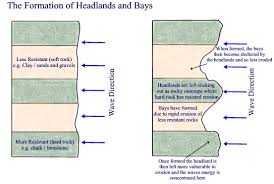 Coastal depostition takes place in eareas where the flow of water slows down. Sediments can no longer be carried or colled along and has to be deposited.

Coastal deposition usually occur in bays, where the energy of the waves is reduced on entering the bay/ This explains the presence of beaches in bays and accounts for the lack of beaches at headlands, where wave energy is much greater.

Landforms formed by Deposition (The Spit)

Occasionally, long shore drift may cause a spit to grow right across a bay, trapping a freshwater lake or lagoon behind it. 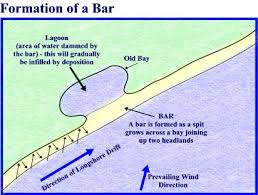 Landforms formed by Deposition (The Spit)

Spit is a finger of new land made of sand and shingle, jutting out of the sea from the coast. 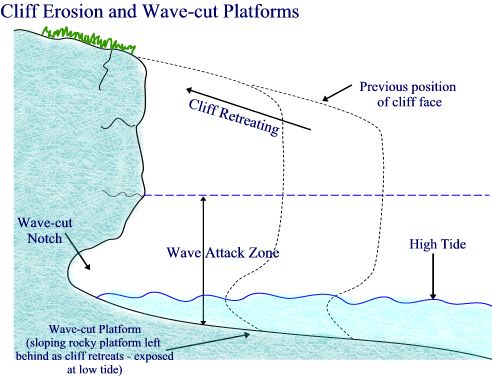 Explanation of Cliffs and Wave-Cut Platforms

Features of a wave-cut platform

It is caused by

What places could be affected?

More than 70% of the worlds population live of coastal plains, the effects of rising sea levels are likely to be devastating

Which Land Processes Shape our Coastline

Weathering: The break up or decay of rock sin their original place at or close to the Earth's surface.

Mass movement: is the downhill movement of material under the influence of gravity.

Rockfall- Fragments of rock break away from the cliff face often due to freeze-thaw weathering.

Mudflow- Saturated soil and weak rock flows down a slope.

In the same way that sugar dissolves in tea, some mineral and rocks dissolve in rainwater.

Carbonation is similar to solution in that it dissolves. It affects rocks that are made up of calcium carbonate such as limestone and chalk. 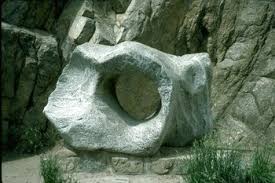 An amazing revison source. Thankyou. This is excellent :)