Urbanisation is the increase in the proportion of people living in towns and cities.

Prior to 1950 the majority of urbanisation occurred in MEDCs (more economically developed countries). Rapid urbanisation took place during the period of industrialisation that took place in Europe and North America in the nineteenth and early twentieth centuries. Many people moved from rural to urban areas to get jobs in the rapidly expanding industries in many large towns and cities. Since 1950 urbanisation has slowed in most MEDCs, and now some of the biggest cities are losing population as people move away from the city to rural environments. This is known as counter-urbanisation. You can read more about this process here.

Since 1950 the most rapid growth in urbanisation has occurred in LEDCs (Less Economically Developed Countries) in South America, Africa and Asia. Between 1950 and 1990 the urban population living in LEDCs doubled. In developed countries the increase was less than half.

The main causes in LEDCs

The three main causes of urbanisation in LEDCs since 1950 are:

1.    Rural to urban migration is happening on a massive scale due to population pressure and lack of resources in rural areas. These are 'push' factors.

2.    People living in rural areas are 'pulled' to the city. Often they believe that the standard of living in urban areas will be much better than in rural areas. They are usually wrong. People also hope for well-paid jobs, the greater opportunities to find casual or 'informal' work, better health care and education.

The UN predicts that by 2030 60% of the world's population will live in urban environments.

·         The pathway shows how level of urbanisation changes over time.

·         Countries become more urban as they develop economically-they develop from LICs into MICs to HICs.

·         A country starts at a low level of urbanisation, and then the rates of economic development and urbanisation speed up.

·         Later, as the pace of economic development slows down, the rate of urbanisation slows down too.

·         The level of urbanisation begins to flatten out, often when roughly two-thirds of a HICs population is living in urban areas.

·         The pathway takes the form of an S-shaped curve. The curve may begin to drop as counter urbanisation takes place.

A million city is a city with one million (or more) inhabitants. These are the largest cities on the planet: 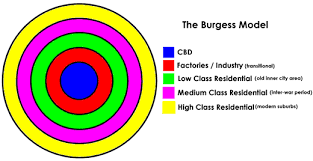 Based on human ecology theories done by Burgess and applied on Chicago, it was the first to give the explanation of distribution of social groups within urban areas. This concentric ring model depicts urban land use in concentric rings: the Central Business District (or CBD) was in the middle of the model, and the city expanded in rings with different land uses. It is effectively an urban version of Von Thunen's regional land use model developed a century earlier. It contrasts with Homer Hoyt's sector model and the multiple nuclei model.

The model is more detailed than the traditional down-mid-uptown divide by which downtown is the CBD, uptown the affluent residential outer ring, and midtown in between.

The model has been challenged by many contemporary urban geographers. First, the model does not work well with cities outside the United States, in particular with those developed under different historical contexts. Even in the United States, because of changes such as advancement in transportation and information technology and transformation in global economy, cities are no longer organized with clear "zones".

It describes the peculiar American geography, where the inner city is poor while suburbs are wealthy; the converse is the norm elsewhere

The sector model, also known as the Hoyt model, is a model of urban land use proposed in 1939 by economist Homer Hoyt. It is a modification of the concentric zone model of city development. The benefits of the application of this model include the fact it allows for an outward progression of growth. As with all simple models of such complex phenomena its validity is limited.

While accepting the existence of a CBD, Hoyt suggested that zones expand outward from the city centre along railroads, highways, and other transportation arteries. Using Chicago as an example, an upper class residential sector evolved outward along the desirable Lake Michigan shoreline north of the central business district, while industry extended southward in sectors that followed railroad lines.

In developing this model Hoyt observed that it was common for low-income households to be near railroad lines, and commercial establishments to be along business thoroughfares. Recognizing that the various transportation routes into an urban area, including railroads, sea ports, and tram lines, represented greater access, Hoyt theorized that cities tended to grow in wedge-shaped patterns -- or sectors -- emanating from the CBD and centered on major transportation routes. Higher levels of access meant higher land values, thus, many commercial functions would remain in the CBD but manufacturing functions would develop in a wedge surrounding transportation routes. Residential functions would grow in wedge-shaped patterns with a sector of low-income housing bordering manufacturing/industrial sectors (traffic, noise, and pollution makes these areas the least desirable) while sectors of middle- and high-income households were located furthest away from these functions. Hoyt's model attempts to state a broad principle of urban organization.

This model applies to numerous British cities. For example, if it is turned 90 degrees counter-clockwise it fits the city of Newcastle upon Tyne reasonably accurately. This may be because of the age of the cities when transportation was a key limitation, as general rule older cities follow the Hoyt model and more recent cities follow the Burgess (concentric zone) model.

The theory is based on early twentieth century rail transport and does not make allowances for private cars that enable commuting from cheaper land outside city boundaries. This occurred in Calgary in the 1930s when many near-slums were established outside the city but close to the termini of the street car lines. These are now incorporated into the city boundary but are pockets of low cost housing in medium cost areas.

The multiple nuclei model is an ecological model put forth by Chauncy Harris and Edward Ullman in the 1945 article "The Nature of Cities." The model describes the layout of a city. It notes that while a city may have started with a CBD, similar industries with common land-use and financial requirements are established near each other. These groupings influence their immediate neighbourhood. Hotels and restaurants spring up around airports, for example. The number and kinds of nuclei mark a city's growth.

The theory was formed based on the idea that people have greater movement due to increased car ownership. This increase of movement allows for the specialization of regional centres (e.g. heavy industry, Business Park). The model is suitable for the big and expanding cities. The number of nuclei, around which the city expands, depends upon the situational as well as historical factors. Multiple nuclei develop because:

Counter-urbanisation is the movement of people out of cities, to the surrounding areas. Since 1950 this process has been occurring in MEDCs (More Economically Developed Countries). There are four main reasons for counter-urbanisation:

1.    The increase in car ownership over the last 40 years means people are more mobile. This has led to an increase in commuting. Also, the growth in information technology (E-mail, faxes and video conferencing) means more people can work from home.

2.    Urban areas are becoming increasing unpleasant place to live. This is the result of pollution, crime and traffic congestion.

3.    More people tend to move when they retire.

4.    New business parks on the edge of cities (on Greenfield sites) mean people no longer have to travel to the city centre. People now prefer to live on the outskirts of the city to be near where they work.

·         The highest rates of urbanisation are occurring in LEDCs. Urbanisation happened in most MEDCs during the industrial revolution in about 1780. Today it has really finished as a process in MEDCs.

·         Before 1950, most “million cities” were located in developed countries in Europe and North America. Since then, there has been a huge increase in million cities in developing countries, most of which lie between the Tropic of Cancer and Capricorn. (look at a map)

·         People are migrating from the countryside to the cities because of push and pull factors. Push factors force people out of rural areas whilst pull factors attract people to the towns.