Location and formation of fold mountains

They are made of layers of sedimentary and metamorphic rock which have been compressed and folded by tectonic forces.

Fold mountains are created when a geosyncline forms between two tectonic plates.

The geosyncline is a basin which contains a sea. Rivers carrying sediment flow into the sea and deposit their load.

Over millions of years, the sea fills up with layers of sedimentary rock.

Gradually, the two tectonic plates move towards one another compressing the rock. This rock is folded and faulted; it is forced upwards to form fold mountains.

The Himalayas were formed due to the compression of the Sea of Tethys between the continental plates of India and Eurasia. Everest rises to 8,848m

Location and formation of ocean trenches

Ocean trenches occur in a linear pattern where one oceanic plate is forced underneath another.

This is a destructive plate boundary. The plates are being pushed together and the older, denser plate is pushed downwards.

The driving force is convection currents in the mantle.

At the oceanic trench, the currents are descending towards the core of the earth and dragging the plate with it.

This creates a deep sea trench

The sichuan earthquake occured in 2008 in south western China.

The earthquake measured 7.9 on the richter scale

The maximum displacement was 9m

The primary effect was 90,000 people dead and 4.3 million homeless

The secondary effect was that all the roads in the region were damaged resulting in a delay in the arrival of rescue troops.

An example of why earthquakes occur (Sichuan)

Two continental plates, the Indian and the Eurasian plates are moving towards each other and are being destroyed

The plates are pushed together with great force creating tension

This built up and was released as an earthquake measuring 7.9 on the Richter scale.

The focus was over 19km below the surface

The epicentre was in Wenchuan province

Features of a composite volcano and formation (Mon

Soufriere Hills, Montserrat is a composite volcano formed of layers of ash and lava.

The lava is acidic with a high silica content giving the cone a narrow base and steep sides.

Montserrat lies on a compressional plate boundary with the denser North American plate being subducted under the lighter Caribbean plate.

Features of a shield volcano and formation (Surtse

Surtsey, Iceland is a shield volcano which rises to a height of 170 metres

There is a central vent and large crater

The cone is made of basic lava which is very runny

The eruptions are regular and frequent

Surtsey lies on a tensional or constructive plate boundary.

The North American and the Eurasian are moving apart

Magma rises up from the mantle to fill the gap

Why earthquakes and volcanoes occur in similar are

For example, they can be seen as a ring of fire around the Pacific.

Some boundaries are constructive. Here the plates are being forced apart by convection currents in the mantle. There are shallow focus earthquakes when the plates move.

Magma rises to fill the gaps which forms basic lava volcanoes such as Surtsey, Iceland

Some boundaries are called destructive. Here the plates are pushing into each other. There are deep focus earthquakes in the subduction zone where the denser oceanic plates is subducted under the lighter continental one.

In the subduction zone the oceanic plate melts and rises to the surface. It forms explosive volcanoess such as Soufriere Hills, Montserrat

Human Activity in the Alps

The alps rise toover 4,000 metres, Mont Blanc is 4,810 metres; there are steep sided valleys which sometimes have flat valley floors.

Farming is located on the steep south facing slopes. Dairy herds spend their winters in barns on the valley floor, in the summer they are moved up to graze. This is called transhumance.

Fodder crops are grown in the summer on the valley floors. Sheep and goats are also grazed in the high mountain slopes in summer, this is because the soil is too thin and acidic to grow arable crops. This is called extensive pastoral farming.

Coniferous trees are grown on many slopes. Sawmills are located on the valley floors.

In winter, tourism provides an income particularly in St Moritz and Chamonix which is a focus for skiing. These areas have tried to extend their season with such activities as the train tour of the Mer  de Glace.

The steep slopes, high rainfall and summer snowmelt provide fast flowing rivers. Hydro-electric power is generated from the rivers as they are to dam such as Bieudron

Responses to the Montserrat eruption

Soufriere Hills, Montserrat started erupting in 1995 after having been dormant for 350 years.

There were ash falls across the island and the immediate response was to dig up the buildings out from under the ash.

However, they then decided to evacuate Plymouth, the capital.

In the short-term the authorities then decided to make an exclusion zone across the south part of the island.

Inhabitants were moved to the north. They then had to consider wether to stay or go as it was uncertain if the volcano would become quiet

For the long term, in 1997, the British Government gave the people £2,700 per person to aid relocation.

The long-term plans now involve a decision to relocate the airport which was previously at Salem.

Also the plan to relocate the capital to New Bay

In 2008, an earthquake meauring 7.9 on the Richter scale occured in Sichuan, south west China.

The immediate response was to send 50,000 troops to the region on Wenchuan Province

The internet was used to link up survivors and assist rescue efforts.

Also, in the short term, 70,000 bodies needed to be cleared to reduce the spread of disease.

Copper prces rose as there was concern over supplies from local mines.

The long-term response is focused on rebuilding the infrastructure.

over 7,000 classrooms had collapsed. The local people needed to find ways they can trust the builders of the new schools

How a super volcano is different?

A supervolcano is much larger than other volcanoes. There are no supervolcanoes on Earth today but there are 1000s of ordinary volcanoes.

Supervolcanic eruptions can cause the extinction of species and change global temperatures whilst ordinary volcanoes have a much smaller impact.

Supervolcanoes can be seen today as collpased calderas such as Yellowstone National Park. 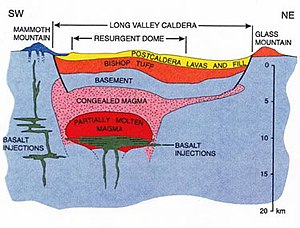 Impact and characteristics of the Boxing Day tsuna

On Boxing Day, 2004, there was an earthquake under the Indian Ocean which measured 9.1 on the Richter scale this triggered a series of waves which spread out from the epicentre located off the coast of Sumatra

The wave occured because the water was moved vertically. Many countries in the Indian Ocean were flooded by waves up to 30m high. The waves moved at about 750km per hour and in some places travelled 2km inland

The immediate impact was the death of 250,000 people in over 8 countries. 1/3 of the deaths were children and four time as many women were killed than men

The event led to a donation of $7billion of aid

Many people lost their jobs in fishing or tourism. Therefore in the long term fishing boats were built. Hotels were repaired and tourists tempted back. The people have also started building an early warning system for tsunamis