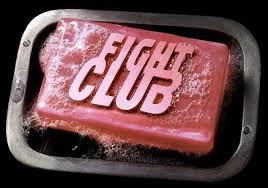 -   Explicit  violence (Jack fights with himself physically and metaphorically)

-  Non-diegetic voice over (unreliable, we live in the mind of a psychotic)

-  No identity- Jack is nameless (we only know him through the voiceover), different name tags, in Project Mayhem they are nameless

Tyler Durden could be described as the 'Id'

· The personality which encourages one to perform reckless and mischievous actions.

·  Is attractive, powerful, care-free, sexually dominant (mise-en-scene of jazzy coloured costume and red leather jacket contrasting to Jack’s grey work suit)- “looks like you want to look, ***** like you want to ****”.

·  As the film progresses, we see this personality strengthen and begin to gain control over Edward Norton's 'Ego'. Towards the end, Tyler disappears completely, suggesting that the Id has completely replaced the Ego as the dominant personality.

The Super-Ego acts as a ground for the Narrator to find his morals and his place within society (beginning with the support groups, then the fight clubs after the Narrator meets Tyler, and concluding with Project Mayhem).

1) Where Tyler first sleeps with Marla is a good example of identifying each personality's morals and goals.  When Jack speaks to Marla on the phone he immediately rejects her and leaves; however Tyler, the Id, is driven solely by pleasure, and begins an affair with her.  This is early in the film, and shows the Id as a pleasure-fulfilling personality.

2) When Jack shots himself he is trying to regain himself and his Ego; high pitched ringing sound signals his state of equilibrium.

Trade marks such as:

Institution- The studio pressured Fincher to change aspects of the films design, casting and production.

Fincher relies on pre-conceived stereotypes of gender - Marla, is objectified frequently by Tyler ("Sport ****") and the theory that all men are violent and brutal. (Logan Philips)

- Marla is not typically feminine (amplified sound of her footsteps gives us pre-imaginings of a typical female character, which contrasts to her actual character and dark costume, covered eyes wearing sunglasses- mysterious)

- Marla helps to reveal that Jack and Tyler are the same person to audiences and to Jack himself.

- Chloe is the only other female character which is given any focus - She has had everything taken away from her and all she desires is sex, which is a basic human desire. (The role of women is very sex based, like Marla)

- In the end Jack becomes the typical ‘hero’ by protecting Marla’s safety and taking responsibility, somewhat