Rock is broken down by mechanical+chemical weather

Mechanical weathering- the breakdown of rock without changing its chemical composition.

Chemical weathering- the breakdown of rock by changing its chemical composition.

Mass movement is the shifting of rocks and loose material down a slope, e.g. a clif.

They're more likely to happen when the material is full of water; the water acts as a lubricant.

You need to know about 2 types of mass movement:

Slides- when material shifts in a straight line

Slumps- when material shifts with a rotation.

1) hydraulic power- waves crash agaist rock and compress the air in the cracks. This puts pressure on the rock. Repeated compression widens the cracks and makes bits of rock break off.

3) Attrition- Eroded particles in the water smash into ech other and break into smaller fragments. Their edges also get rounded off as the rub together.

The waves that carry out erosional processes are called destructive waves;

1) Waves cause most erosion at the foot of the cliff

2) This forms a wave-cut notch

3) The rock above the notch becomes unstable and eventually collapses.

4)  The collapsed material is washed away and a new wave-cut notch starts to form.

6) A wave-cut platform is the platfrom that's left behind as the cliff retreats.

Headlands Are Eroded To Form Caves, Arches and Sta

Headlands are usually made of resistant rocks that usually have weaknesses like cracks.

Waves crash into the headlands and enlarge the cracks- mainly by hydroaulic power and abrasion.

Repeated erosion and enlargement of cracks causes a cave to form.

Continued erosion deepens the cave until it breakes through the headland- foriming an arch, e.g. Durdle Door in Dorset.

Erosion continues to ware away the rock supproting the arch, until it eventually collapses.

This forms a stack- an isolated rock that's seperate from the headland, e.g. Old Harry in Dorset.

There are 4 other processes of transportation;

Traction- large particles like boulders are pushed along the sea bed by the force of water.

Suspenion- small particles like silt and clay are carried aling in the water.

Saltration- pebble-sized particles are bounced along the sea bed by the force of water.

Solution- soluble materials dissolve in the water and are carried along.

Deposition is the dropping of material.

The amount of material that's deposited on an area of coast is increased when:

Low energy waves (slow waves) carry material to the coast but aren't strong enough to take a lot of material away- this means there's lots of deposition and very little erosion.

Waves that deposit more material than they erode are called constructive waves:

Beaches are formed by deposition.

2)They're formed by constuctive waves depositing materials like sand and shingle.

Sand beaches are flat and wide- sand particles are small and the weak backwash can move them back down the beach, creating a long gentle slope.

Spits are basically just beaches that stick out into the sea- they're joined to the coast at one end. If a spit sticks out so far that it connects with another bit of the mainland, it'll form a bar. Spits and bars are formed by longshore drift.

A bar is formed when a spit joins two headlands together, e.g. there's a bar at Slapton in Devon.

The bar cuts off the bay between the headlands from the sea.

This means a lagoon can form behind the bar. 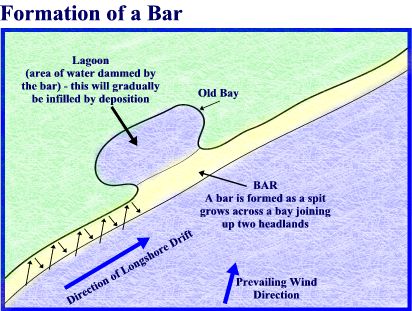 The Maldives is a group of islands in the Indian ocean.

Coastal flooding has a variety of impacts on the Maldives;

The average rate of erosion at Holderness is about 1.8 metres per year.

Erosion is causing the cliffs to collapse along the coastline. The material then gets washed away, so the coastline is retreating.

About 1.8m of land is lost to the sea every year- in some places, e.g. Great Cowden, the rate of erosion has been over 10m per year in recent years.

Easily eroded rock type- the cliffs are mostly made of boulder clay which is easily eroded. It's likely to slump when it's wet, causing the cliffs to collapse.

People worsening the situation- coastal defences called groynes have been built at Mappleton. Groynes stop material from being moved further down the coast. This means the beaches are narrower and more easily eroded in some other places.

Powerful waves- Holderness faces the prevailing wind direction, whcih brings waves from the north east  (all the way from the Artic ocean). Waves increase in power over this long distance, so the coast is battered by hihgly erosive waves.

Some sites of special scientific interest are threatened- e.g. the lagoons near Easington are part of the SSSI. The lagoons are seperated from the sea by a narrow ***** of sand and shingle ( a bar). If this is eroded it will connect the lagoons to the sea and they would be destroyed.

Hard engineering- man made structures built to control the flow of the sea and reduce flooding and erosion.

What are they? wooden or stone fences that are built at right angles to the coast. They trap material transported by longshore drift.

They starve beaches further down the coast of sand, making them narrower. Narrower beaches don't protect the coast as well, leading to greater erosion and floods.

Beach nourishment,, What is it? - sand and shingle from elsewhere (e.g. the offshore seabed) is added to beaches.

Disadvantages?- the protection is limited to a small area, Nourishment is very expensive.

Marsh creation,, What is it? - Planting vegetation in mudflats along the coast.

Managed retreat,, What is it?  - removing an existing defence and allowing the land behind it to flood.

Disadvantages- People may disagree with what land is allowed to flood, e.g. flooding farmland would affect the livlihood of farmers. 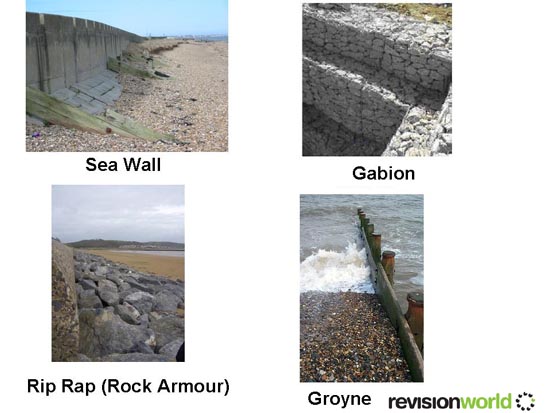 Hard engineering stratagies that have been used along Holdnerness

Bridlington is protected from erosion and flooding by a 4.7km long sea wall as well as wooden groynes.

There's a sea wall, ooden groynes and rock armour at Hornsea that protect the village from erosion and flooding.

There are groynes to create wider beaches and a sea wall at Whithernsea. Some rock armour was placed in front of the wall after it was damaged in severe storms in 1992.

Defences including 2 rock groynes, were built at Mappleton in 1991. They cost £2 million and were built to protect  the village and a coastal road from erosion and flooding.

The Eastern side of Spurn Head is protected by groynes and rock armour. This also protects the Humbler Estuary behind Spurn Head. 1) Groynes protect local areas but cause narrow beaches to form further down the Holdnerness coast. This increases erosion down the coast, e.g. Cowden farm (south of Mappleton) is now at risk of falling into the sea.

3) the rate of coastal retreat along the Lincolnshire coast is also inccreased, because less new material is being added.

4) Spurn Head is at risk of being eroded away because less material is being added to it.

Stutland bay is a coastal area with Beaches, Dunes and Heathland.

1) Stutland bay is a bay in Dorset, in the South West of England.

2) It's mostly sheltered from highly erosive waves, but the southern end  of the bay is being eroded.

3) There are sandy beaches around the bay, with sand dunes and heathland behind them.

4)The heathland is a site of special scientific interest (SSSI) and a nature reserve.

Some of these organisms are specifically adapted to live in the habitats found in Stutland Bay;

There are conflicts between land use and the need for conservation; some human activities (e.g. recreation) don't use the environment in a sustainable way (they use up resources or damage the environment). The environment is managed to make sure it's conserved, but can also be used for other activities:

1) Lots of people walk across the sand dunes which has caused aa lot of erosion.  The national trust manages the area so people can use the sand dunes without damaging them too much:

2) Hundreds of boats use Stutland Bay and their anchors are destroying the seagrass where seahorses live. Seahorses are protected by law, so boat owners are being told not to damage the seagrass.

3) The heathland behind the sand dunes is an important habitat, but it can be damaged by fires by things like cigarettes- the national turst is educating visitors about these dangers.