Bands of soft rock such as clay and sand are weaker therefore they can be eroded quickly. This process forms bays. A bay is an inlet of the sea where the land curves inwards, usually with a beach. Hard rock such as chalk is more resistant to the processes of erosion. When the softer rock is eroded inwards, the hard rock sticks out into the sea, forming a headland.

The sea attacks the base of the cliff between the high and low water mark.

A wave-cut notch is formed by erosional processes such as abrasion and hydraulic action - this is a dent in the cliff usually at the level of high tide.

As the notch increases in size, the cliff becomes unstable and collapses, leading to the retreat of the cliff face.

The backwash carries away the eroded material, leaving a wave-cut platform.

The process repeats. The cliff continues to retreat.

Cracks are widened in the headland through the erosional processes of hydraulic action and abrasion.

As the waves continue to grind away at the crack, it begins to open up to form a cave.

The cave becomes larger and eventually breaks through the headland to form an arch.

The base of the arch continually becomes wider through further erosion, until its roof becomes too heavy and collapses into the sea. This leaves a stack (an isolated column of rock).

The stack is undercut at the base until it collapses to form a stump.

Sediment is carried by longshore drift.

When there is a change in the shape of the coastline, deposition occurs. A long thin ridge of material is deposited. This is the spit.

A hooked end can form if there is a change in wind direction.

Waves cannot get past a spit, therefore the water behind a spit is very sheltered. Silts are deposited here to form salt marshes or mud flats.

The area around Swanage is made up of bands of hard and soft rock. The soft rock is made of clay and sands, and the hard rock is chalk and limestone. As erosion processes take place, the clay erodes away quicker than the limestone and chalk. This forms headlands and bays, creating Swanage Bay and two headlands - Ballard Point and Durlston Head.

Old Harry Rocks are located on the headland between Swanage and Studland Bay. The headland is made out of chalk, a hard rock. The headland juts out into the sea, so it is more vulnerable to high-energy waves. This caused the formation of Old Harry, a stack. Over time Old Harry will collapse to form a stump. 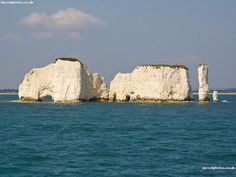 Chesil Beach is an example of a bar. Sediment has been deposited over time to form a spit. The spit has continued to join to the Isle of Portland. Behind the spit there is The Fleet, a lagoon. 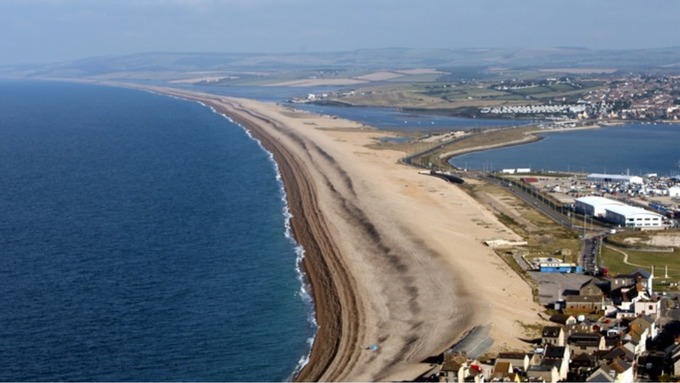