In the periodic table elements are represented by a symbol and sometimes their names. They are arranged in order of proton number, otherwise known as atomic number. The proton number is the number of positive protons in each atom, it is the bottom number.

Arranging the elements by proton number gives a repeating pattern of propertie: in the table each element is placed beneath those with similar properties. 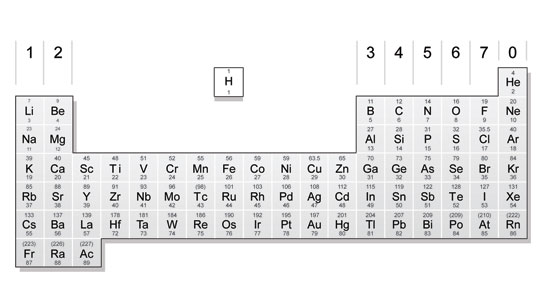 History of the periodic table

During the 18th century the mass of elements could not be measured, so they were compared against the mass of hydrogen. This is known as relative atomic mass.

Dobereiner- 1817- 'Law of triads', realised the relative atomic mass of the middle element in a group of three elements (that had similar properties) was close to the average of the other two elements.

Newlands-  He arranged the known elements in order of their atomic masses. He proposed a 'law of octaves', meaning every eighth element had similar properties. This did not work for all the known elements, so was dismissed by the scientific community.

Data from the table

Relative atomic mass (RAM)- Top number, above the proton number. It is a comparative measurement of the mass of one atom of the element. You can use it to see how much heavier an atom of one element is compared with an atom of another element

Data from the table

Each column in the table contains elements with similar properties, called a group. Each has a group number, shown across the top of the table.

Periods are the rows of elements on the periodic table.

The elements to the left of the red line are metals, those to the right are non metals. The elements are mainly metals. 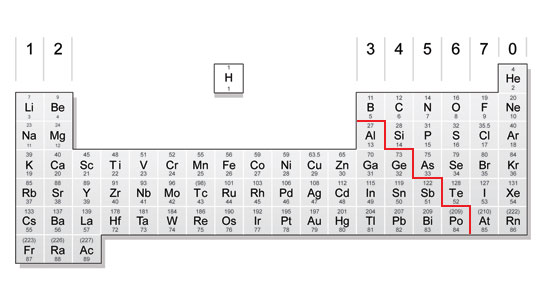 Because there are patterns in the way the elements are arranged in the periodic table, it can be used to predict their properties and interpret data. It is possible to predict both physical and chemical properties for elements in the same group.

They must not be touched because they will react with the water in sweat on the skin. Gloves may be used, and goggles should be worn

Group one reactions with water

The alkali metals react vigorously with cold water. In each reaction hydrogen gas is given off and a metal oxide is produced. The speed and violonce of the reaction increases down the group.

Lithium- Floats, fizzes and and becomes smaller until in disapears.

Sodium- Melts to form a ball that skates on the surface, fizzes rapidly and the hydrogen may burn with an orange flame, before the sodium disapears.

Potassium- Melts, floats, skates around quickly on the surface of the water. The hydrogen ignites instantly. The metal is set on fire and sparks with a purple flame. There is someties a small explosion at the end of the reaction.

The hydroxides formed in all of these reactions dissolve in water to form alkaline solutions. These solutions turn universal indicator purple, showing they are strongly alkaline. Strong alkalis are corrosive, so care must be taken when they are used - for example, by using goggles and gloves.

All of the alkali metals react vigorously with chlorine gas. Each reaction produces a white crystalline salt. The reaction gets more violent as you move down group 1, showing how reactivity increases down the group.

Lithium- If a piece of hot lithium is lowered into a jar of chlorine, white powder is produced and settles on the sides of the jar. This is the salt lithium chloride.

Sodium-If a piece of hot sodium is lowered into a jar of chlorine, the sodium burns with a bright yellow flame. Clouds of white powder are produced and settle on the sides of the jar. This is the salt sodium chloride.

Potassium- Potassium reacts more violently with chlorine than sodium does

Room temperature is usually taken as being 25°C. At this temperature, fluorine and chlorine are gases, bromine is a liquid, and iodine and astatine are solids. There is therefore a trend in state from gas to liquid to solid down the group

The halogens become darker as you go down the group. Fluorine is very pale yellow, chlorine is yellow-green, and bromine is red-brown. Iodine crystals are shiny purple - but easily turn into a dark purple vapour when they are warmed up.

The halogens become less reactive as you go down the group. Fluorine, at the top of the group, is the most reactive halogen. It is extremely dangerous, causing severe chemical burns on contact with skin.

Halogens are bleaching agents. They will remove the colour of dyes. Chlorine is used to bleach wood pulp to make white paper.

Halogens kill bacteria. Chlorine is added to drinking water at very low concentrations. This kills any harmful bacteria in the water, making it safe to drink. Chlorine is also added to the water in swimming pools.

Because the halogens are very reactive and poisonous, care must be taken when using them. Chlorine is used only in a fume cupboard. Iodine should not be handled (it will damage the skin). Gloves may be used, and goggles should be worn.

The reactivity of the halogens decreases as we move down the group. This can be shown by looking at displacement reactions.

When chlorine (as a gas or dissolved in water) is added to sodium bromide solution the chlorine takes the place of the bromine. Because chlorine is more reactive than bromine, it displaces bromine from sodium bromide. The solution turns brown. This brown colour is the displaced bromine. The chlorine has gone to form sodium chloride.

At the centre of an atom is a nucleus, which contains protons and neutrons. All atoms of the same element have the same number of protons.

Electrons are arranged in shells around the nucleus. In a neutral atom the number of protons is the same as the number of electrons.

The shells can also be referred to as energy levels. The number of the shells and the number of electrons in the outer shell varies from one element to another.

Protons and neutrons have the same mass, which is larger than the mass of an electron.

Neutrons have no charge, they are neutral.

When the atoms of some metals are heated they give off coloured light. The colour given off is different for every metal and can be used to identify them.

All atoms give off light when heated, although sometimes this light is not visible to the human eye. A prism can be used to split this light to form a spectrum, and each element has its own distinctive line spectrum. This technique is known as spectroscopy. Some examples of what line spectra look like are shown here:

Scientists have used line spectra to discover new elements. In fact, the discovery of some elements, such as rubidium and caesium, was not possible until the development of spectroscopy. The element helium was discovered by studying line spectra emitted by the Sun.

Starting from the simplest element, hydrogen, and moving through the elements in order we can see how the electrons fill the shells. The innermost shell (or lowest energy level) of electrons is filled first. This shell can contain a maximum of two electrons.

The electronic structure of each element can be shown simply as the number of electrons in each shell. For example, lithium is 2.1, neon is 2.8.8, and calcium is 2.8.8.2.

The arrangement of electrons can also be shown using a 'Dot-and-cross' diagram. Electron shells are drawn as circles, with the electrons on each shown as dots or crosses.

Electronic structure- the way electrons are arranged on an atom.

The period number of an atom is the same as the number of occupied shells.

The group number is the same as the number of electrons inthe outer shell.

Group 0 is a partial exception to this rule, since although it comes after group 7 it is not called 'group 8', and it contains helium, which has only two electrons in its outer shell.

Working out electronic structure from the periodic

Here's how to use the periodic table to work out an electronic structure:

Working out electronic structure from the atomic n

Elements of group one all have 1 electron in their outer shell. This is why their chemical properties are similar.

In a reaction with a non-metal, each alkali metal atom loses its outer electron and becomes an ion with a single positive charge, +1.

Francium atoms, with 7 shells, are the largest atoms in group 1. They are very reactive.

The atoms of the elements in group 7 (also called the halogens) have seven electrons in their highest occupied energy level (the outer shell). This is why their chemical properties are similar.

In a reaction with a metal, each halogen atom gains an outer electron and becomes an ion with a single negative charge, -1.

As you go down group 7 the atoms become larger, and the highest occupied energy level (the outer shell) becomes further from the nucleus. The force of attraction between the positively-charged nucleus and a negatively-charged electron from another atom becomes weaker.

As a result, it becomes harder to attract and gain an electron the larger the atom becomes. The more difficult it is to gain these outer electrons, the less reactive a halogen is.

Astatine atoms, with 6 shells, are the largest atoms in group 7. They are very unreactive.

When a metal reacts with a non-metal, each metal atom loses the electron, or electrons, from its outer shell. The atom loses negative electrons but still has the same number of positive protons, so it has an overall positive charge. It's not an atom now. Instead it is called an ion.

When a metal reacts with a non-metal, each non-metal atom gains the number of electrons needed to fill its outer shell. The atom gains negative electrons, but still has the same number of positive protons, so it becomes an ion with a negative charge.

When metals react with non-metals, electrons are transferred from the metal atoms to the non-metal atoms, forming ions. The resulting compound is called an ionic compound.

Here are some reactions between metals and non-metals:

You need to be able to draw dot-and-cross diagrams to show the ions in some common ionic compounds. For example:

Diagram of bonding in sodium chloride. A sodium atom gives an electron to a chlorine atom. The result is a sodium ion (2,8)+ and a chloride ion (2,8,8)-. Both ions have full outer shells.

Ionic bonds form when a metal reacts with a non-metal. Metals form positive ions and non-metals form negative ions. Ionic bonds are the electrostatic forces of attraction between oppositely-charged.

Working out formulae and charges

If you know the charges on the ions in an ionic compound, you can work out its formula.

If you have the formula of an ionic compound and the charge on one of the two ions, you can work out the charge on the other ion.

For example, sodium oxide has the formula Na2O, and the charge on a sodium ion, Na+, is +1. To balance up the charges from two sodium ions, the oxygen ion must have two negative charges, O2-.