DNA (deoxyribose nucleic acid) molecules are large and complex. They carry the genetic code that determines the characteristics of a living thing.

Except for identical twins, each person’s DNA is unique. This is why people can be identified using DNA fingerprinting. DNA can be cut up and separated, forming a sort of 'bar code' that is different from one person to the next.

A gene is a short section of DNA. Each gene codes for a specific protein by specifying the order in which amino acids must be joined together.

The cell’s nucleus contains chromosomes made from long DNA molecules.

The diagram shows the relationship between the cell, its nucleus, chromosomes in the nucleus, and genes.

Mitosis is the type of cell division that leads to growth or repair. When a cell divides by mitosis:

Mitosis is the type of cell division that leads to growth or repair. When a cell divides by mitosis:

Human body cells have 23 pairs of chromosomes in the nucleus. One of these pairs controls the inheritance of gender - whether offspring are male or female:

Chromosomes from a female

Chromosomes from a male

Fertilisation is the joining or fusion of a male gamete and a female gamete. The new cell that is formed divides over and over again by mitosis. This creates the many cells that eventually form a new individual.

Gametes are formed from cells in the reproductive organs by a type of cell division called meiosis.

The cells that are formed by meiosis have half as many chromosomes as the cell that formed them. Human body cells contain 23 pairs of chromosomes, while human gametes contain 23 single chromosomes.

The main features of meiosis are:

The diagram outlines how this works.

When an egg and sperm cell come together, the now fertilised egg contains 23 pairs of chromosomes. Sex chromosomes are responsible for certain genetic traits.

Human body cells each contain 23 pairs of chromosomes. Parents pass on theirgenes to their offspring in their sex cells.

Sex cells only contain one chromosome from each pair. When an egg cell and sperm cell join together, the fertilised egg cell contains 23 pairs of chromosomes. One chromosome in each pair comes from the mother, the other from the father.

A set of chromosomes can be separated from its cell, spread out on a microscope slide and magnified many thousands of times. When stained and photographed, they look like this:

Chromosomes from a female

Chromosomes from a male

When sex cells form, the pairs of sex chromosomes (** and XY) are separated. Remember that females carry **, males XY. This means:

So a human baby’s gender is determined by the sperm that fertilises the egg cell. The baby will be a girl if it carries an X chromosome. It will be a boy if the fertilising sperm carries a Y chromosome. Study the animation below to test your understanding of this.

Some societies prefer to have male children. It is now possible in some countries to choose the sex of a child using IVF. Some people think parents should be able to choose the sex of their future children, especially if they had a child that died, or already have three or four children of the same sex. Other people think we should not be able to choose, because this could affect the balance of males and females in society, or because they believe it is against God or nature.

Decisions of this kind are called values. Science can provide information and data, but it cannot answer questions about values. Values often result in different people coming to different decisions. This is why some people think we should be able to choose the sex of our children while others do not.

The Y chromosome carries a gene called the ‘sex-determining region Y’, or SRY for short. The SRY gene causes testes to develop in an XY embryo. These produceandrogens: male sex hormones. Androgens cause the embryo to become a male: without them, the embryo develops into a female.

Genetic diagrams are used to show the possible outcomes of a particular cross. A dominant allele is shown by a capital letter, and a recessive allele by a lower case letter.

Mother and father both have one F and one f allele

This genetic diagram shows the possible outcomes when only one parent carries the faulty allele. There is no chance of the offspring being homozygous for the faulty allele and therefore having cystic fibrosis.

Mother has two F alleles, father has one F and one f allele. 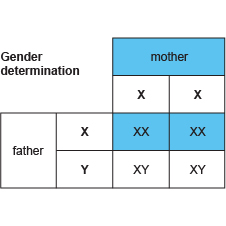 Females are ** and males are XY

Different versions of a gene are called alleles, and these alleles can be dominant or recessive. Genetic diagrams can show the possible outcomes of a particular cross.

Examples of inherited characteristics include:

Some characteristics - including intelligence, body mass and height - are the result of both environmental and inherited factors. But there is debate about the relative importance of these two types of factor in some human characteristics, such as intelligence, health and sporting ability.