The Drainage basin- An area of land drained by a river and its tributaries, an open System.

The water reaches the river in the drainage basin by:

Infiltration- Movement of water in to the soil

Percolation- Flow of water due to gravity through soil 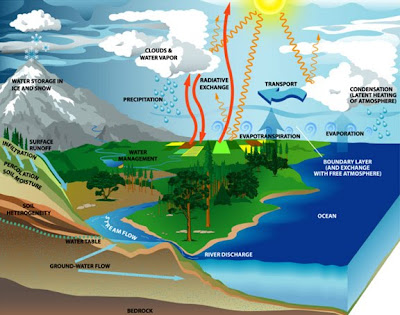 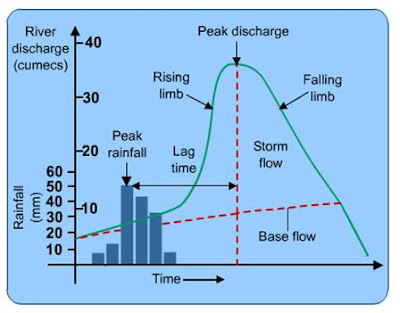 Hydraulic Action- The turbulent flow of water lifts loose sediment when the river has a high velocity.

Abrasion- The rubbing of the bed and banks by material carried along by the river.

Attrition- The reduction in size of the sediment particlesas the collide with each other, the bed and the banks.

Solution- Where the rocks dissolve into the water and are corried. Most commonwhen the bed is made of carbonate rocks like limestone. 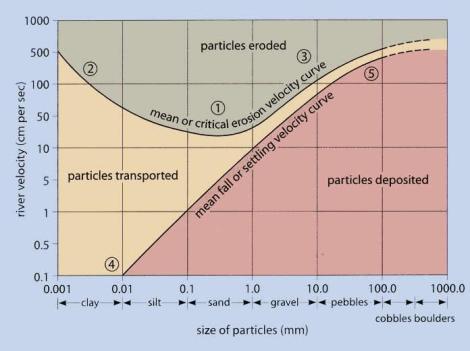 The Hjulstrom curve- The relationship between velocity and the maximum size load the river is able to carry(competence). Shows the velocities that sediment will nomaly be eroded, transported or deposited.

Two key points can be made from The Hjulstrom curve:

Competence- The maximum size load a river can carry.

Capacity- The maximum amount of load a river can carry.

The long profile of a river- Image Card 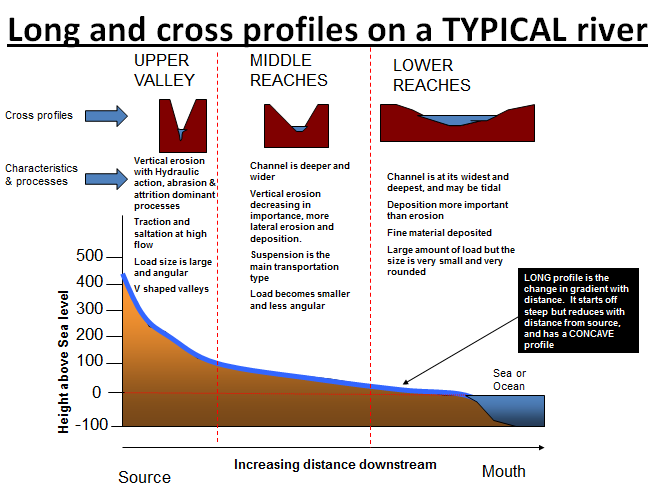 The long profile of a river

Long profile of the river- reprsents the height of the river floor from source to mouth. It is an idealised profile which is a concave pattern which is steeper towards the source. The profile is never smooth due to waterfalls and knick points.

Changes in the long profile of a river downstream:

A graded profile- a long profile of a river that has eventually balanced out the createa smooth concave curve, sometimes called dynamic equilibrium.

This means that the deposition and the erosion  in the river is balanced and the irregularities in the river are eventually smoothed out.

Factors that interrupt this pattern:

Human- Damaging the river in the upper course can lead to abnormal bits of flat gradient as sediment is depsited. Also human intervention of the river as the river is used to drive factories and held in docks can also interupt the smootness of the river.

Physical- Rejuvination can vertically erode the river close to the source leading to steps in the river valley lick nick points and waterfalls.

Rapids- Fast flowing water that tumbles over rocky shallow riverbeds. White water is when air mixes with the flow of the river.

Formed by the steepening of the river gradient where potential energy increases vertical erosion.Formed where there is alternating stripes of resistant and soft rock exposed on the river bed.The softer rock erodes deeper than the hard rock  leaving a series of hard rock bands which the water tumbles over and breaks up creating turbulence and white water.

Waterfall- A sudden fall of water that occurs where there are rapid changes in the gradient of the river's course.

Formed where there is a layer of resitant rock over a layer of softer rock. The softer rock is undercut and forms and over hang of the resitant rock.The plunge pool at the foot of the falls experiences the force of the falling water and the swirling action leads to increased erosion and the formation of a deep pool.

When the over hang collapses the process starts again, meaning the waterfall retreats leaving agorge behind 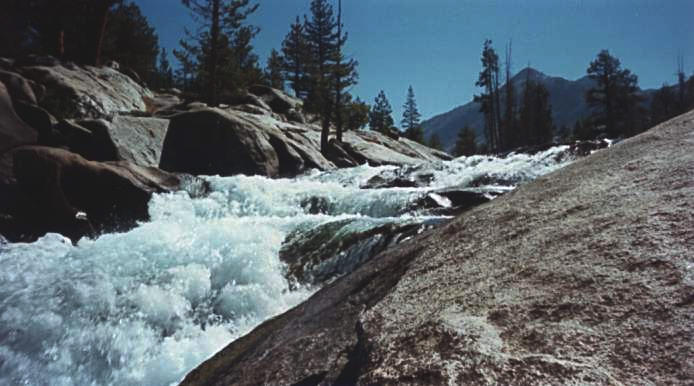 Floodplains- Flat areas of land, on the valley floor at each side of a river channel where sediment builds up called alluvium. Middle course of the river and widen further down stream.

Formed by deposition when the river breakes its banks and looses energy and competence due to friction on the valley floor. This means the river slows down and deposits sediment. The finner the material the further away from the river the sediment is deposited.

Successive floods add to the alluvium and increase fertility of the land. As rivers migrate over time and leave behind slip off slopes(point bars) this adds to the flood plain.

Levees- Parallel banks of sediment that run next to the river channel, natural levees can be upto 2m high. Can be heightened by people for flood defences.

Formed by depostion during flooding when the river looses energy and competence and deposits its sediment on to the floodplain. The larger coarstest sediment gets deposited first which builds up over time creating a natural embankment. River Braiding- When a river channel is split into several channels that are seperated by islands of deposited load called sand bars. Occur in river with a high range of discharge like in semi arid enviroment-ephemeral waddies after a storm.

Are formed when the gradient is steep and there is plenty of load in the river and the discharge fluctuates daily or annually. When the river has high discharge, energy and competence that then decreases the river drops its load which chokes up the channel splitting the river into smaller channels.

Deltas- Sediment deposited at the mouth of a river when it enters a slow moving body of water such as a lake or the sea.Highly changeable landforms as they are made of unconsolidated sediment.

Oxbow Lakes- The curve of the meander taht gets cut off from the river channel by deposition that eventually drys up causing an oxbow scar.

The sinuosity os the meander (the curving nature of the meander) increases with more erosion the inner banks become closer tohether closing off the meander neck. At times of flood the neck can be eroded away giving the river channel a straighter,route. This forms a looped lake that eventually gets cut off by deposition forming an ox bow lake. 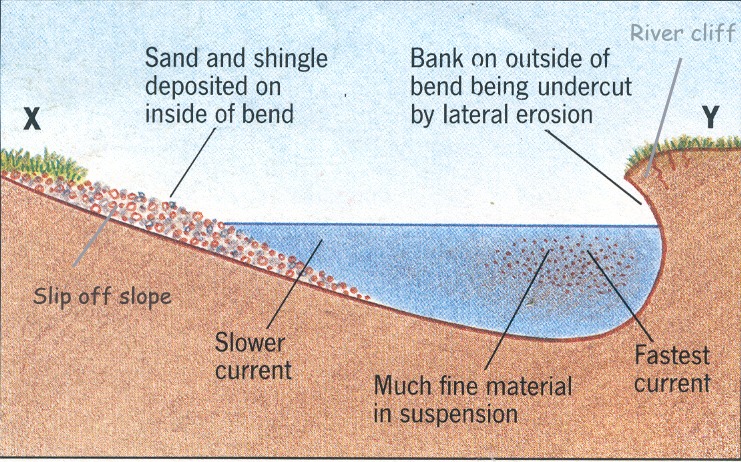 Was a flash flood, Totally unexpected, Never experienced such a flood in that area suggesting that it a was result of exceptional factors.

Soft engineering is not very effective and is more about reducing the impacts however it is cheaper, sistainable and protects valuable habitats.

Hard engineering is overall more effective at reducing flooding however is expensive to build and and maintain and is unatural to the surroundings and habitat.

There were some errors that luckily were quite obvious but was extremely useful!
Covers almost everything in Core Physical Rivers.

Few spelling mistakes and the like, but amazingly useful!

few mistake,   but with common sense you  should be able to spot them