What is perceptual set?

Perceptual set is defined as a predisposition to attend to and percieve certain aspects of a stimulus and disregard other, and a tendency to interpret a stimulus in a certain way.

What is perceptual accentuation?

What was Gilchrist and Nesberg's study (Aim, Metho

Method- Participants viewed food-related and non-food-related pictures which they were then asked to rate on a scale for colour and brightness. one group of participants had been deprieved of food and liquid for several hours and the other group had not (independant groups)

Conclusion- Gilchrist and Nesberg suggested that hunger and thirst were motives which led to perceptual accentuation, producing perceptions which were stronger and brighter than normal. (This study is an exapmle of how motivation can induce a perceptual set)

What is the effect of expectation on perceptual se

when you have been shown/told that you are seeing pictures/objects of a certain genre or type, then you will expect all the things you see to be in that category. (context-induced perceptual set)

Method- In an independant design, perticipants were shown either a series of numbers or a series of letters. In each case, the centre stimulus was exactly the same

. participants were shown either letters and numbers along with this ambigous figure and state what they saw.

Conclusion- Bruner and Minturn concluded that perception of sensory information varies according to the context in which a stimulus is presented, and that by altering the immediate context it is possible yo predispose participants to interpret visual information differently. The study therefore supports the existance of context-induced perceptual set

What effect doees emotion have on perceptual set?

What is McGinnies study (Aim, Method, Results and

Method- Using a tachistoscope (scientific instrument used by psychologists; presents visual stimuli (aka pictures) for brief exposures.), participants were presented with words which were either unpleasent and offensive or neutral. the words were projected very rapidly at first with gradually increasing display times. the task was to say each word out loud as soon as it was recognised.

Conclusion- Participants took longer to percieve the offensive taboo words because of perceptual defence, the unconcious defence mechanism acting to protect us from consciously experiencing the unpleasent words

NB- there is no way of knowing people realy didnt recognise the offensive taboo words, because they could have recognsed them but not wanted to say them.

Which study is an example of how culture affects p

Aim- Brislin set out to compare participants from different cultural backgrounds in their susceptibility to the ponzo illusion: 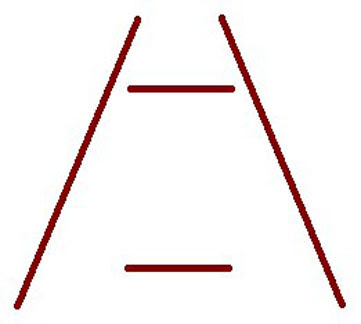 Method- Using particpants from the United States and Guam, Brislin compared susceptibility to the ponzo illusion. Participants were asked to judge the length of the two horizontal lines, and it was noted whther they thought the top line was longer than the bottom one.

Results- it was found that particpants from rual and non-western environments were less likely to think that the top horizontal line was longer than the other than particpants from western backgrounds.