Home > A Level and IB > Chemistry > Alkanes and Petroleum

1. Alkanes have the general formula CnH2n+2. They've only got carbon and hydrogen atoms, so they're hydrcarbons.

2. Every carbon atom in an alkane has four single bonds with other atoms. It's impossible for carbon to make more than four bonds, so alkanes are saturated.

3. You get cycloalkanes too. They have a ring of carbon atoms with two hydrogens attatched to each carbon.

4. Cycloalkanes have a different general formula from that of normal alkanes (CnH2n, assuming they have only one ring), but they are still saturated.

1. Petroleum is just a poncy word for crude oil - the black, yukky stuff they get out of the ground with huge oil wells. It's mostly alkanes. They range from smallish alkanes, to massive alkanes with more than 50 carbons.

2. Crude oil isn't very useful as it is, but you can seperate it into more useful bits (or fractions) by fractional distillation.

1. First, crude oil is vapourised at about 3500 degrees celsius.

2. The vaporised crude oil goes into the fractionating column and rises up through the trays. The largest hydrocarbons don't vapourise at all, because their boiling points are too high  they just run to the bottom and form a gooey residue.

3. As the crude oil vapour goes up the fractionating column, it gets cooler. Because of the different carbon chain lengths, each fraction condenses at a different temperature. The fractions are drawn off at different levels in the column.

4. The hydrocarbons with the lowest boiling points don't condense. They're drawn off as gases at the top of the column. 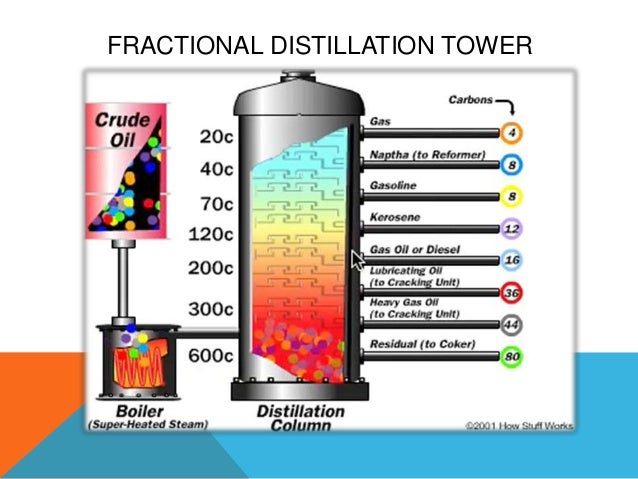 1. People want loads of light fractions, like petrol and naptha. They don't want so much of the heavier stuff like bitumen though. Stuff that's in high deman is much more valuable than the stuff that isn't.

2. To meet tis demand, the less popular heavier fractions are cracked. Cracking is breaking long-chain alkanes into smaller hydrocarbons (which can include alkenes). It involves breaking the C-C bonds.

There are two types of cracking you need to know about:

Thermal Cracking - It take splaces at high temperature and high pressure. It produces a lot of alkenes. These alkenes are produced to make heaps of valuable producs, like polymers. A good example is poly(ethene), which is made from ethene.

Catalytic Cracking - This makes mostly motor fuels and aromatic hydrocarbons. It uses something called a zeolite catalyst (hydrated aluminisilicate), at a slight pressure and high temperature. Using a catalyst cuts costs, because the reaction can be done at a lower temperature and pressure. The catalyst also speeds up the reactions, and time is money and all that.