There is evidence that the first living things appeared on Earth billions of years ago. There are many scientific theories to explain how life began. One theory involves the interaction between hydrocarbons, ammonia and lightning.

Stanley Miller and Harold Urey carried out some experiments in 1952 and published their results in 1953. The aim was to see if substances now made by living things could be formed in the conditions thought to have existed on the early Earth.

The two scientists sealed a mixture of water, ammonia, methane and hydrogen in a sterile flask. The mixture was heated to evaporate water to produce water vapour. Electric sparks were passed through the mixture of water vapour and gases, simulating lightning. After a week, contents were analysed. Amino acids, the building blocks for proteins, were found. 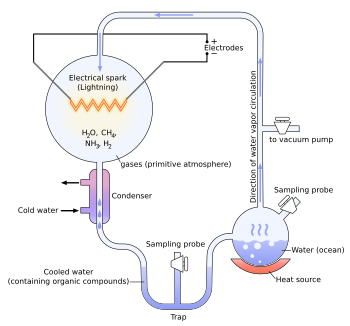